Stick Man returns to the West End for Christmas 2012

Posted: 3rd August 2012
Julia Donaldson's and Axel Scheffler's much loved creation will be at the Leicester Square Theatre from November, tickets available now 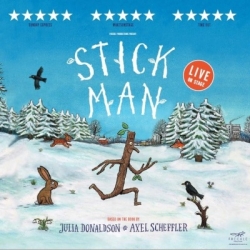 In the considerable wake of the Gruffalo, came Stick Man. Actually, there was a decade between the two, packed with modern storytime classics such as Room on the Broom and The Snail and the Whale, all from the pen of Julia Donaldson. The author's delightful rhymes with their mesmeric cadence are, of course, given added vitality by the child-like brilliance of Axel Scheffler's illustrations.

It is an irresistible brew and, together, Donaldson and Scheffler have produced stories for all seasons. One of the more wintry tales is 2009's Stick Man, the story of a man, made from stick, and his quest to return to his family tree where his stick children and Stick Lady Love wait for him. Being a mere twig, he is carried by wind and water and dog on a typically enchanting journey as he defies the odds and battles to return home.

Along the way, amidst the snow and warming fires, Stick Man helps out a familiar figure late on Christmas Eve. In return, perhaps he will earn his route home...

Expect 'puppetry, songs, live music and funky moves', lots of laughs and fun for all the family when Stick Man arrives for another Christmas season in the West End later this year.

Stick Man will be at the Leicester Square Theatre from 17th November 2012 until 6th January 2013. Performances are Wednesday to Sunday with occasional exceptions on public holidays and there are matinees on Saturdays and Sundays. We have tickets available now, priced £14.50.