Coheed and Cambria unleash The Afterman on autumn 2012 UK tour 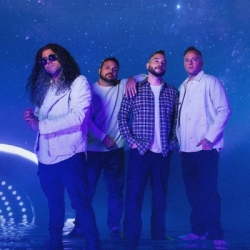 What came first, the chicken or the egg? The novel or the film? The band or the sci-fi graphic- novels? In the case of Coheed and Cambria, the science fiction comics created by lead singer Claudio Sanchez definitely appeared well ahead of the hugely-successful prog-metal outfit - the band's moniker is directly derived from his 'The Amory Wars', the equally successful graphic novels that charts the universal journey of the family Kilgannon, whose members Coheed, Cambria and son Claudio (of course) come into contact with the ruler of the 78 planets, Wilhelm Ryan, not a nice man.

If you've been buying the series of novels then you may well already be into Coheed and Cambria the band and vice-versa, the two seemingly go hand-in-hand since lyrically, both draw reference from each other. Musically, C&C wouldn't offend fans of Muse, Marillion or Iron Maiden. All four groups write stories and supercharged them with powerful riffs and classical beauty (in varying degrees) and all four have a propensity for theatre and drama.

Fittingly, Coheed and Cambria are due to support Iron Maiden on their 'Maiden England' tour in North America very soon, before the former head to the UK with plans of their own already in place. New project 'The Afterman', again linked to The Amory Wars series, promises the ultimate deliverance for C&C fans. Not only are we talking a new album, we're talking TWO albums, one suffixed as 'Ascension', the second as 'Descension'. We are also talking a proposed film of The Amory Wars with Mark Wahlberg at the helm and C&C music throughout.

To tease you with a snippet of the band's new music, we've popped a trailer for 'The Afterman' on this page - we're already intrigued. As well as hearing new material on the video, you can catch them unveiling more with new members Josh Eppard and Zach Cooper at the Reading and Leeds Festivals over the Bank Holiday.

But it's headliners you really want and there are some planned for November, starting with Camden's KOKO on the 8th, followed by Birmingham and Manchester. We will have tickets on sale from 9am Friday, priced from £18.50 to £20. Keep 'em peeled for more show announcements in due course.