Dog is Dead to follow debut album with autumn 2012 tour 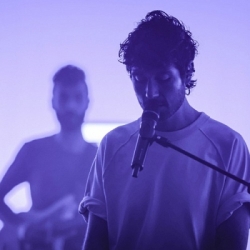 It's all happening for Dog is Dead. But not in the OMG-I'm-through-to-the-live-finals-of-BGT! way. No, the indie quintet's rise is the result of considerable, sustained hard work and no little talent. They are currently conquering the airwaves with their third single, Glockenspiel Song, which has Radio 1, XFM and 6 Music all making bedroom eyes at them, and they are redefining the term 'hard working' with around 25 festival appearances this summer.

Audiences will always to warm to the irresistible combination of talent and hard work, and Dog is Dead's recent efforts will culminate in their debut album and a major headline tour, both launching in October. The new record and busy summer follows a 30-date tour earlier this year and support slots including Bombay Bicycle Club and Tribes.

The debut album, All Our Favourite Stories, is due out on 8th October with the promotional tour kicking off a fortnight later at the Manchester Academy. The tour takes in Birmingham, Bristol and more before the final date at the Cockpit in Leeds on 6th November 2012. There is a London gig at Scala on 1st November.

We will have tickets available from 9am on Friday 3rd August, priced £10 for London and £8.50 for other venues. Ahead of the album release, you can catch Dog is Dead supporting Bastille at the Bucks Chiltern Uni SU on 20th September - we've tickets available now for just £7. You can also catch them at the Leeds and Reading festivals later next month.