Posted: 30th July 2012
The London five-piece will follow the release of their debut album with busy tour which begins in Scotland in October, tickets on sale Friday 3rd August 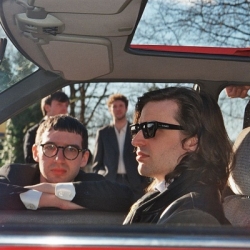 When Spector close out their hectic autumn tour in early November, it'll be almost exactly a year since Fred Macpherson and his charges raised eyebrows with some assured performances on Later With Jools Holland at the back end of 2011. It's been quite a 12 months.

They were nominated in the BBC's highly regarded Sound of 2012 poll, went on to support Florence and the Machine on Ms Welch's spring tour and are set to release their debut album, Enjoy It While It Lasts, on Monday 13th August. The record will provide a neat résumé of the last year, with tracks like Never Fade Away, What You Wanted, Chevy Thunder and, most recently, Celestine, all having featured as Spector grabbed the headlines.

The positive reviews all talked about Spector sounding like The Killers with accents of Roxy Music, the Strokes and Pulp. And who are we to argue with that? It sums up Spector's infectious sound well. In part epic, undoubtedly romantic, Fred MacPherson's theatrical lead vocal lifts Spector above the ordinary. Throw in a few hooks, a hummable refrain here, a memorable bassline there, and it becomes a potent concoction. If you still need convincing, you could do a lot worse than checking out one of the many live dates coming up later this year.

The huge tour kicks off in Glasgow at Oran Mor on 11th October, followed by dates in Aberdeen, Carlisle, Preston, Sheffield, Leeds and many more before the final date at the Shepherds Bush Empire on 10th November. Support comes from Swim Deep (all dates), Splashh and LULS (both on selected dates). Manchester and London shows will see all three lining up to support Spector.

We will have tickets available from 9am on Friday 3rd August, priced from £10.