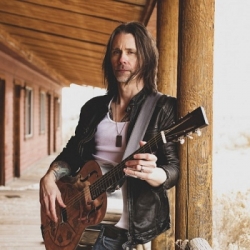 Slash released his second album, Apocalyptic Love, in May. With the help of Alter Bridge frontman Myles Kennedy as lead vocalist on each of the 13 tracks, the record followed his 2010 debut into the US Top Five and bettered his first outing here in the UK, with a No 12 placing.

Having broken out as a recording artist in his own right, Slash graduated from gun-for-hire to solo headliner with that self-assured self-titled 2010 debut. It was a defining moment for a man who was still inextricably linked to his alma mater, Guns N'Roses. When band members go their separate ways, the spotlight (and pressure) nearly always falls on the lead vocalist and/or songwriter. It's rare that the guitarist, in spite of contributing to some of the band's most memorable motifs, enjoys comparative solo success.

Especially when they've spent the last decade or two stood to the side of the stage, shades on, hat dipped. But there's always a handful who buck expectation; musicians too irrepressibly talented to go quietly. And, for such musicians there's inevitably a bustling queue of heavy-hitters lining up to work with them. Myles Kennedy took lead vocals on Apocalyptic Love and he joins Slash for the autumn dates, with his band Myles Kennedy and the Conspirators also providing support.

The tour kicks off at the Edinburgh Corn Exchange on 7th October, followed by dates in Manchester, Birmingham and London, before the final gig at the Newcastle Academy on 15th October. The original London show is at the Brixton Academy on 11th October 2012, with a second Brixton date now added for 12th October.

We have tickets available now from around £30 but be quick - Newcastle and Manchester are already sold out.