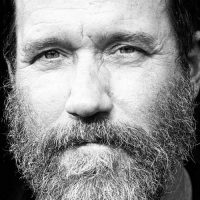 Fans of US punksters Hot Water Music will be familiar with the name Chuck Ragan, not least for his founding of the band and unbroken membership from 1993 to the band's split in 2006. While the remaining members formed The Draft, Ragan settled into a solo career that, well, hasn't always been entirely solo. He's been a busy little collaborator for a start, appearing on Frank Turner tours, joint-album projects with The Gaslight Anthem's Brian Fallon (still in the vaults) plus Sam Russo and Darren Gibson, as well as the creator of an annual event, The Revival Tour.

Taking a lead from the traditional communal spirit afforded by early generations of musical families around the world, not just the US, The Revival Tour showcases top-notch performers outside of their 'comfort zone' (ugh, bad expression), singing and playing with little but a guitar or favoured instrument, in a small venue with a smallish audience. The idea has, in Ragan's words, "been nothing but an invigorating breath of fresh air amongst the sea of live music out there today". Quite. Previous performers have included Fallon (who also appears with Turner on Ragan's new album 'Covering Ground') and Alkaline Trio's Dan Andriano.

2012 will see the 5th full Revival Tour head out on tour around Europe, after a successful earlier jaunt around the US. Special guests this year include singer-songwriter Cory Branan, Bedouin Soundclash's Jay Malinowski, Aussie Emily Barker (that's her singing the Wallander theme, by the way) and Texan Rocky Votolato.

UK dates have been split into two batches with the first in October covering Cardiff, Norwich, London and Brighton and the second rounding off the tour in November in Portsmouth, Manchester and more until Leeds on 20th November. Islington (18th Oct) will be on sale via us tomorrow (Friday 27th) while the remainder all hit our servers at 9am this Saturday (28th). Prices are £14 regionally and £15 for London.