The Milk warm up for autumn 2012 with a November tour

Posted: 25th July 2012
The indie upstarts will follow their release of their debut album with a busy November tour, tickets on sale Friday 27th July 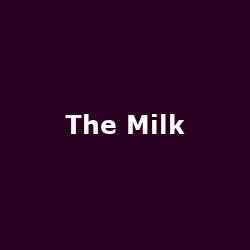 The Milk (or simply the slightly awkward 'Milk') seem to have been knocking around for a good while now. In fact, it was four years ago that the band got together, eventually settling on a three-piece line-up with Claire Robbin and Adam Stark sharing vocals.

Ever since, they've been building momentum and no little anticipation as they experiment with various different noise and electronic components, veering from indie rock to shoegaze and back again. But, soon enough, the talk has to stop. People will only chatter excitedly about the next big thing for so long before their priorities turn to what they're having for tea.

And so it goes with the Milk. Thankfully, they've finally delivered (oof) with their debut album, Tales from the Thames Delta, set for release on 3rd September with a promotional tour lined up a few weeks later.

The bustling tour kicks off in Brighton on 15th November, followed by dates including Liverpool, Manchester, Leeds, Birmingham and more, before the final gig announced so far at the O2 Academy in Oxford on 30th November 2012. There's a London show at the Shepherd's Bush Empire (their biggest ever) on 29th November.