Spear of Destiny announce Outlands and Beyond UK 2012 tour 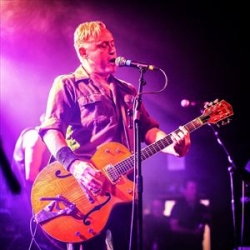 If you were a regular attendee of ubiquitous indie and goth discos back in the mid to late '80s, then S.O.D. is an acronym with which you may be familiar. Spear of Destiny's fiery blasts of rebellion-soul and boisterous knuckles-high power-anthems were a staple in my town - Plymouth's finest establishments such as Ziggy's, Wood's, Monroe's and that ropey sticky-carpet wonderland above Flares... forgotten its name... were responsible for the occasional chipped teeth caused by flailing arms during 'The Liberator' and 'Come Back' and pre-S.O.D. Theatre of Hate's 'Westworld'. Happy days. Sore ones too.

But as with many punk-new-wave outfits, Spear of Destiny calmed down as time passed and later songs didn't reach DJ playlists with New Order, Psychedelic Furs, New Model Army or Sisters of Mercy. However, the mainstream beckoned instead - no bad thing if the music is good, of course. Kirk Brandon's charges had already threatened to hit big with the aforementioned club favourites, as well as 'The Wheel' and 'Prisoner of Love', all taken from their first three albums, 'Grapes of Wrath', 'One-Eyed Jacks' and major-label debut 'World Service'.

In 1987, things took a turn for the better with 'Outland', their first for Virgin Records. Packaged in a grainy retro sleeve with a 'Boys Own' style etching of Brandon and burning fields, the nine songs had an air of the resolute and resilience about them. Big hit 'Never Take Me Alive' proved pivotal for a while, 'Strangers In Our Town' mirrored the passion of earlier works with a rousing chorus and 'The Traveller' was a poignant reflective anthem that just missed out on being a Top of the Pops contender.

All in all, 'Outland' remains a terrific fist-pumping set for grown-ups and will sound great live when the band revisit it and other releases, including 2010's 'Omega Point', the band's most recent album. Their tour begins in November soon after Brandon and his charges have supported Stiff Little Fingers on their UK jaunt. Stops include Leeds, Nottingham, Glasgow and finally Islington on 2nd December. Tickets for these four shows went on sale today (Wednesday) priced from £12.50 upwards and it's expected that more venues will be added to their travels in due course.