Posted: 23rd July 2012
The pop icon shakes off the cancellation of Hit Factory Live and continues his renaissance with a clutch of autumn shows, tickets Friday 27th July 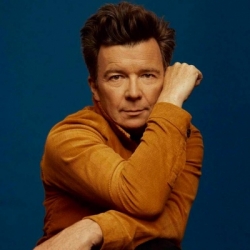 Ah yes, Rick Astley. The Never Gonna Give You Up guy who gave it all up. Or so the urban myth goes. The sugary sherbet pop explosions of the late eighties seemed to account for a number of high profile derailings; Kylie found Michael Hutchence, Jason Donovan found the white lady and Fairground Attraction found they couldn't be in the same room as one another.

One of the decade's biggest stars was, of course, the incongruously mellifluous Rick Astley whose bell-like tones chimed their way to No 1 all over the world with his Stock Aitken and Waterman hit, Never Gonna Give You Up. It topped the charts here for more than a month and also hit No 1 spot in the US as well as more than 20 other countries. Far from a one-hit wonder, Rick followed with hit after hit and a clutch of best-selling albums (he's sold around 40 million records to date).

And then, the story goes, it all got too much for him. He had a meltdown and walked away from all the fame like a fool. Not true. Yes, he did get fed up with the media game and, in his position, who wouldn't, but mostly he began to care much more about his family and his daughter Emilie than about pop. His girl is now around 20 and hasn't needed dad to come to her school assembly for a good few years and Rick has gradually been committing more and more of the last decade to his music career.

Into 2012, Rick Astley - singer, songwriter, dad - is doing more than cropping up on Rewind tours and doing PAs at eighties nights. For one thing, he's touring this autumn. The dates announced so far begin in Manchester on 17th October and end at Bournemouth's Old Fire Station a week or so later. We'll have tickets available from 9am on Friday 27th July, prices to be confirmed. Nice one, dad.