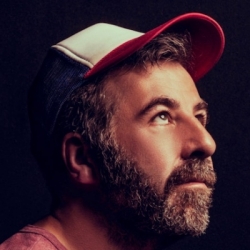 Irish comedian and writer David O'Doherty has been making his mark at Edinburgh for over a decade, first picking up a (then) Perrier Best Newcomer nom and, in 2008, the main award for his show Let's Comedy. Now one of the Fringe's 'made' guys, in 2011 he tried out a slightly new angle, as a character comedian. It went bloody well.

The hilarious result was Rory Sheridan's Tales of the Antarctica, the story of an Irish explorer (with zero exploration experience) and his adventures at the edge of the earth in 1917. The 'illustrated talk' seeks to tell the story of Sheridan's 26 months at sea aboard HMS Pelmet, from which the explorer somehow returned home as acting expedition leader.

Rory Sheridan is touring his Tales of the Antarctica in order to raise funds to repay the substantial debts he owes the Royal Antarctic Society as a result of his doomed polar voyage. It's unclear whether the RAS approves of his presentation.

The London residency kicks off at The Invisible Dot on 24th September, running until the 29th. On 13th October, Rory's stories hit the road beginning in Brighton, followed by gigs in Oxford, Manchester and more, before the final gig announced so far at the Glee Club in Birmingham on 7th November. There's an additional London show at the Lyric Theatre on 5th November.

We have tickets available now, priced from £10 for the Invisible Dot shows to £16 for the Lyric gig. The remaining dates are priced £12 to £15.