Bell X1 to unleash their Field Recordings on 2013 UK tour 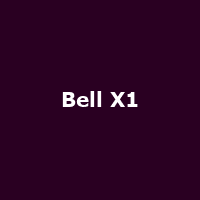 The words 'anthemic', 'rock' and 'Irish' are likely to summon up thoughts of Snow Patrol or U2, yet we're actually aligning the trio of descriptive at Bell X1. Who, you may ask? Hailing from Dublin and Kildare, the band were originally called Juniper before one of their members, a certain Damien Rice, leapt from an increasingly argumentative ship to leave the remaining members to it. Arguably the best option all round - Rice has notched up a few big-selling albums on his tod, Bell X1 have done the same in Ireland - both parties must be fairly pleased with their career paths so far.

So, after dropping the gin-soaked moniker of yore, Bell X1 have knocked out an admirable batch of sturdy indie-rock albums that ooze warmth and confidence, yet without the shouting from rooftops like the Bonos of this world. They earned their first number 1 album in Ireland with 'Flock', a feat repeated with the next collection in 2009, 'Blue Lights On The Runway'. For a while, there was even a sniff of a feasible crossover here in the tricky UK, in particular with the singles 'Eve, The Apple Of My Eye' and 'Flame', but both stalled at #65. Not surprisingly, with several successes back home and numerous award-nominations, Paul Noonan and co can afford to eschew usual practice and electricity and go acoustic for an album and a tour.

The new project is 'Field Recordings', a 21-track double album of live tracks drawn from their 2010 world tour. It's due out as a digital-only release next week in Ireland, with the possibility of a physical version to follow. After a slot at Ireland's Electric Picnic Festival on 1st September, the band will embark on a North American Tour, before heading back to the UK for a clutch of acoustic shows in 2013. At present, Bell X1 will be playing in Glasgow on 23rd January 2013, followed by Manchester on 24th and London on 25th.

They won't be large venues due to the intimate nature of the music and the shows, so you'd best be quick on the draw for those tickets when they go on sale on Tuesday 24th July at 9am, except Glasgow which is on sale now. Tickets are priced at £12.50 for Glasgow, £15 for Manchester and £18.50 for London.