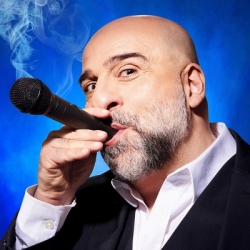 Noël Coward's uniquely informed take on English society wasn't always defined by his own clipped tones and notions of cricket whites and midday sun. As so much good observational art, it is often at its best not from the inside, but when on the outside looking in.

And so Coward, in his post-war years, found himself holed up in Jamaica, penning tales of the colonies and wealthy widows. The long-lost Volcano is one such story. Written in 1956, with Katherine Hepburn in mind for the lead, the play was never performed in Coward's lifetime. Supposedly inspired by an affair between the playwright's friend Ian Fleming (the Bond author) and a society beauty, Volcano offers an insight into the "decadent, scandal-ridden lifestyle" that Coward and the ex-pat community enjoyed. And what could be more English than that?

Jenny Seagrove takes the moneyed widow role envisaged for Hepburn, in a production from Thelma Holt and Bill Kenwright. Volcano previews at the Vaudeville Theatre from 14th August, with a full opening on 16th August. The limited run closes on 29th September 2012. We have tickets available now, priced from £20 to £65 for the very best stalls.

Ahead of the Vaudeville run, the touring production is still to stop off in Brighton (tickets available below) and Bromley (sold out) before heading up the A21 to the West End. Meanwhile at the Vaudeville, Joe Orton's What the Butler Saw starring Omid Djalili, Tim McInnerny and Samantha Bond, runs until 28th July.