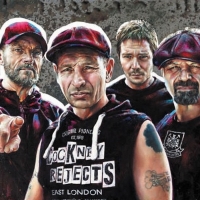 A cursory glance at Canning Town's Herbert-punksters' album discography tells you all you need to know about the band's cheeky approach to music. 'Greatest Hits 1' and 'Greatest Hits 2' were the ultimate rowdy collections of 1 to 3-minute terrace anthems that really did mean 'terrace' in the '80s.

Being from the East End of London, Jeff Geggus (aka Stinky Turner) and co were staunch West Ham fans, into boxing and rather intolerant of the police and the then Tory government. They weren't going to sing about roses, falling in love or opening a shiatsu parlour, now were they? After the indie-hit 'Flares and Slippers' earned them the attentions of EMI offshoot Zonophone, their two albums appeared, stunning many when the major label proceeded to issue a few singles from each of them, earning the group a few hits and get them on Top of the Pops, of all places. A few parents probably gagged on their Spam when 'The Greatest Cockney Rip-Off' and 'I'm Forever Blowing Bubbles' (yes, that West ham anthem) spewed forth at 7.30 in the evening (probably no more than when the Stranglers or the Pistols were on).

Although the Rejects ran with 'firms' and 'hoolies', their knuckles remained reserved for opposing supporters or boxing opponents, rather than innocent bystanders. Sadly though, a few press articles strived to place the band firmly in with the less acceptable right-wing politics of skinheads, a situation which occasionally left Geggus and crew no choice but to tough out the bad guys at their often-raucous gigs. Their new film East End Babylon is likely to feature such episodes, along with excerpts from classic concerts and rare footage from Geggus' early years as an amateur boxer. It will tour cinemas later this year.

Prior to the band's support slots with American punks Rancid in December, Cockney Rejects will be brandishing their own knees-up with shows across the UK, with material likely to feature in their documentary. Dates include Manchester on 5th October followed by London, Leicester, Brighton, Norwich and more until Sheffield on 12th October.

The 2012 tour was originally rescheduled to 2013 due to post-production conflicts with the Cockney Rejects' film 'East End Promises'. However, these rescheduled dates have now been cancelled due to a disagreement with the band's agent, making their only 2013 UK date an appearance at Blackpool's Rebellion Festival 2013 - along with The Damned, GBH, Cock Sparrer and many more.