The Killers warm-up for 2012 V Festival with Leeds gig

Posted: 17th July 2012
Brandon Flowers and his charges will be bringing their huge sound inside to the comparative intimacy of the Leeds Academy, tickets on sale Friday 20th July 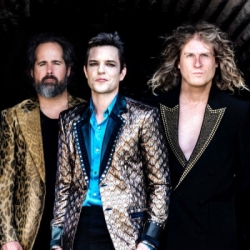 In a little over eight years since the release of their debut album Hot Fuss, The Killers have graduated from glittery indie upstarts into mainstream rockstars with a global profile. From XFM to Radio 2, from academies to arenas, Brandon Flowers and his band have continued to grow in stature and fill ever grander venues and write yet bigger headlines.

Their three studio albums have shifted more than 15 million copies and a fourth, Battle Born, is scheduled for release in September. Ahead of the new record, Brandon, Dave, Ronnie and Mark will be making a few summer festival appearances, including V Festival slots here in the UK and, no doubt, airing some of that new material alongside their canon of indie synth-rock classics.

In a comparatively short time, tracks like Mr Brightside, Somebody Told Me and All The Things I've Done have quickly entered the lexicon of modern indie, highly regarded by fans and peers alike and already featuring in various all-time lists. Most notable among these is Mr Brightside which is regularly cited in the same hallowed company as tracks such as Love Will Tear Us Apart and She Bangs The Drums. Early days, perhaps, but there can be no denying the impact The Killers have made.

The Killers play Leeds Academy on 17th August. We will have tickets available from 9am on Friday 20th July, priced £37.50 - they are expected to sell out quickly. The following night, The Killers head the bill at the V Festival in Weston Park, Staffordshire, before leading the line at the Chelmsford event on Sunday 19th August. We have some tickets (a mixture of Standard and Premium) available now for the V Festival slots.