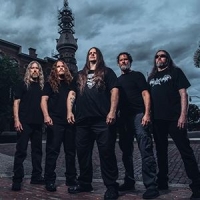 How many death-metal bands does it take to start a tour? These days, from one to umpteen if you count the one-off Vans Warped Tour show in London later this year. Two seems to be an ideal number though - a bigger share of everything from the rider to the takings, less squabbling about who goes on stage next, equal share of the tour-bus 'facilities', etc.

Californian ear-bleeders DevilDriver know all about sharing - their last UK tour back in 2010 had a damned fine support act in the shape of 36 Crazyfists, a real draw and a dead cert for some sold out shows. For 2013 and the grisly business of pushing a new album (as yet untitled), DevilDriver have truly surpassed themselves with the additional bounteous aural bludgeoning you are about to experience, Cannibal Corpse, bless them, have a new album right now called 'Torture', from which 'Encased in Concrete' has been lifted as a single for your delectation. Or fear. They will be your support act right here on the DevilDriver tour.

To celebrate the follow-up release to 2011's 'Beast', DevilDriver have announced the makings of a memorable UK tour which also coincides with their 10th anniversary as a recording act. Their first album (self-titled) appeared in 2003 and set the tone for a, thus far, explosive catalogue of ferocity and NOISE - they may even play a bit of it in 2013. The first stop will be the Forum in Kentish Town on 7th March, followed by Nottingham on the 8th, Manchester on the 9th and Glasgow on 10th March.