Posted: 10th July 2012
The blues rock powerhouse will accompany the release of third album, The Savage Heart, with an October tour, tickets now/soon 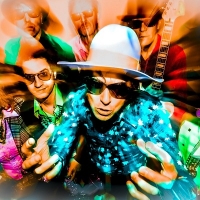 Since forming in London around five years ago, the five-piece Jim Jones Revue have frequently found themselves on the flattering end of some juicy bowing and scraping from fans and critics. The BBC said audiences were "bombarded with sonic viscera" while the Guardian commented that second album Burning Your House Down sounded "like a gangfight set to 12-bar blues".

Both are very colourful and imaginative descriptions but there can be little need to reinvent superlatives for a band that so purely evokes the spirit of traditional rock'n'roll. The Jim Jones Revue sound is, at its savage heart, 1950s' blues-tinged rock and roll; albeit cranked up to certificate 18 from that era's quaint PG version. The new record will be released on 15th October, mid-way through a promotional UK tour which promises more head-splitting, heart-crunching, feral rock than you can shake your money-maker at.

Jim Jones Revue are kicking off their tour in Cardiff's historic Womanby Street at Clwb Ifor Bach, before completing a hectic schedule of 11 gigs in 14 days via Leeds, Manchester, Aberdeen, Norwich, Harlow, Portsmouth and more. The final date is at London's Electric Ballroom on 25th October 2012.

We have a selection of tickets on sale this week, with some already available (Bristol, Brighton) and Manchester going on sale from 9am on Friday 13th July. The majority are available tomorrow, Wednesday 11th, at 10am. Prices vary slightly but are £11 for the most part and £14 for London.