Posted: 9th July 2012
The Senegalese singer and human-rights campaigner leads the line for a month-long celebration of the power of music to effect social change, tickets on sale now 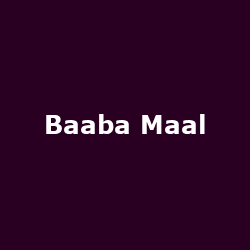 Amid London's most international of summers comes a celebration of African music and culture to compete with any world music event in the capital in 2012. The month-long Africa Utopia comes from the Southbank Centre and sees a series of events showcasing music, theatre, film, literature, fashion and dance, as well as a series of debates, all intended to highlight music as a catalyst for social change in Africa.

Lofty ambitions, perhaps, but the event is being heavily endorsed by Baaba Maal and will see appearances from Maal and other 'elders' including the writer and broadcaster Lemn Sissay, all in two of London's most auspicious venues. Brand new for 2012, Africa Utopia is much more than an opportunity for the great and good to pat themselves on the back and will see young delegates partake in debates and workshops about how art projects can best bring about social change. And, of course, there will be lots of great music.

We have tickets available now for a range of events including Oumou Sangare and Bela Fleck at the Queen Elizabeth Hall on 18th and 19th July (£27.50), and Paco Peña at the Royal Festival Hall on 20th July 2012 (£36). The celebrations continue with DJ Edu at the RFH on 21st July (£10) and sets from Angelique Kidjo and Bassekou Kouyate, supported by Mory Kanté, towards the end of the month (both £22.50).