Shinedown to hit the UK in autumn 2012 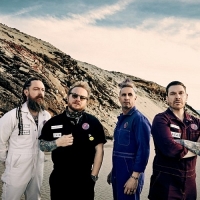 Ah, Jacksonville, Florida. Broad sun-drenched vistas, even wider highways, the warm embrace of year-round sunshine. The sounds of Shinedown, the sound of ROCK. In America's finest traditions, Shinedown have spent a decade blessing the rest of us with energetic, summery rock.

Alt, maybe. Metal, probably. Southern rock, for sure. And it's popular too. Each of Shinedown's 15 singles to date has made the Top 5 of the US Hot Mainstream Rock chart with one of their seven No 1 hits also making the Top 10 on the main Billboard chart (2008's Second Chance).

Albums have done just as well with Amaryllis, the fourth and most recent album, released in March, making the UK Top 20 and peaking at No 4 on the main Billboard chart. The band have said that they consider Amaryllis to be their most complete record yet and the punters would seem to agree. You can make up your own mind when they bring the new material (and the Platinum-selling back catalogue) to these islands in the autumn.

The tour kicks off in Southampton on 24th October, followed by shows in Exeter, London, Birmingham, Manchester, Sheffield and Cardiff, before the final date at the UEA in Norwich on 4th November 2012. The London gig is at the Brixton Academy on 27th October. We will have tickets available from 9am on Friday 13th July, priced £16.