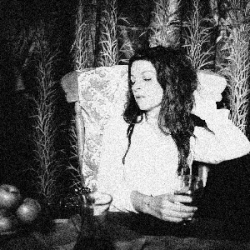 Keen listeners to radio, particularly BBC 6Music, might be fully aware of this lady's perky alternative pop shenanigans embedded in this article. 'Born To' has all the melodic attributes of traditional folk (even Bulgarian Voices in places) yet is delivered as a spot-on slice of mainstream pop - very likeable (you can also download the song for nothing by heading to her website, after reading this of course).

So who is Ms Hoop? Comparisons are tricky since Jesca doesn't stick to formulaic rock per se, but might appeal to anyone into Bat For Lashes (not so moody), Florence (not as brash) or any one of the current stream of smart female singers doing the rounds. Tom Waits was suitably impressed to court her talents publically for a newspaper article back in 2007 (she also worked for him), Elbow and Eels have had her as support on tour and last year she sang in Peter Gabriel's New Blood shows in the US. I know, you're still none the wiser. Perhaps her second album, available to listen to on her website, is worth mentioning.

The story goes that Guy Garvey prised her away from the States to live in Manchester and release her inner self onto the greyer skies of Britain. The result is the recommended 'Hunting The Dress', a quirky personal mix of emotional lyricisms and the dreaded 'folktronica' perfected by Beth Orton - only grittier. Very Manchester and very Los Angeles, in one sitting so to speak. Will her new third long-player have the same mystique and creativity about it? One listen to lead single 'Born To' should answer that question.

Hoop will be touring the UK in the autumn after a few selective festival slots, namely Kendal Calling and Lancashire's Cloudspotting bash. Her September tour begins in Birmingham on 19th, followed by Belfast, Newcastle, York, Sheffield and finally (for now) Cardiff. We have tickets on sale now priced at around a tenner, bargain-hunters.