Posted: 6th July 2012
The Aussie pop-punkers are finally following breakthroughs at home and in America with UK releases and live shows, tickets on sale now 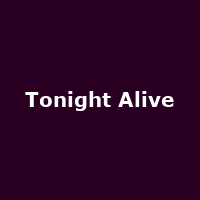 There used to be something reassuringly quaint about the UK film premieres, for some reason, always seeming to follow way behind those in the US and Australia. Although never satisfactorily explained, it gave plenty of opportunity for the excitement to build off the back of favourable reviews stateside or Down Under.

And so it goes with Sydney five-piece Tonight Alive. Four years after forming, they are heading to the UK to promote the recent UK issue of their hit Consider This EP (two years after its original release) and lining up their debut album for UK distribution.

A year after its original Australian issue and eight months after a 2012 Valentine's Day release in the US, debut record What Are You So Scared Of? will be released in the UK in early October, to be followed by a rush of live shows to promote the album. Back when we waited for cinema releases, sometimes for months, grandparents across the land would sagely ooze the maxim "the best things come to those who wait". Delayed gratification is a rare and elusive commodity in 2012 but Tonight Alive are almost certainly worth the wait.

The short October tour kicks off at the Cockpit in Leeds on the 2nd, followed by gigs in Glasgow, Manchester, Milton Keynes, Birmingham and Nottingham, before the final date of the tour at Barfly in London on 9th October 2012. We have tickets available now, priced from just £9, rising to £12 for the Camden date.

Support comes in the shape of Derby rockers LostAlone and the five-piece Blitz Kids.