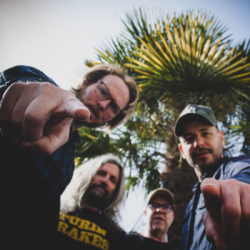 Normally, tribute-albums are often risible, tortuous affairs that smack of cash-in and desperation. Prepare yourself for a shock - here's a terrific example of how such a project should be undertaken. For a start, the chosen artist's work is Talk Talk, a long-revered band whose majestic music is still aired by any radio-station worth its salt. Secondly, the acts chosen to rework the beautiful, atmospheric and hallowed Hollis canon are actually fit for purpose. Thirdly, there's a hulking great art-book coming out that also goes by the same name and tells the story of Talk Talk's legacy, using long-time sleeve-designing ally James Marsh. The band may have quit some two decades ago, but their legacy is well and truly living on.

"Spirit of Talk Talk" is set for release via Fierce Panda on 3rd September and comprises 30 acts covering some of the band's greatest moments from their small but pin-sharp catalogue. Turin Brakes, Fyfe Dangerfield, Goldheart Assembly, Recoil (Depeche Mode's Alan Wilder has produced the album as well), King Creosote, White Lies, Joan As Police Woman, Sean Carey (Bon Iver), Zero 7, Richard Reed Parry (Arcade Fire) and Jason Lytle (Guillemots) are just a few people lending their time and considerable lungs to the project, set up to raise money for the Rare Bird Club, an organization that seeks to protect endangered birds around the world. Naturally, with much wildlife used on Talk Talk's record sleeves, this seems a perfect fit.

On 6th September, a handful of acts will perform at a special album launch party at the 229 Portland Street venue in London. So far, Turin Brakes, Goldheart Assembly and The TenFiveSixty are confirmed to appear. The evening will not only support the release of "Spirit of Talk Talk" the album, but also the considerable and lavish tome compiled by artist James Marsh and featuring passages of praise from Guy Garvey, Karl Hyde, Floyd's Richard Wright and Wild Beasts amongst others.

We have tickets for the Spirit Of Talk Talk launch party available now, priced at £10 plus fee. Hurry - this WILL sell out.