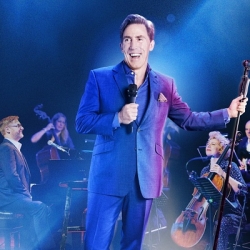 As if Rob Brydon's West End theatre debut wasn't itself appealing enough, he's also treading the boards alongside Nigel Harman and Ashley Jensen, in a modern classic from England's greatest living playwright, all under the direction of Trevor Nunn. Need more? How about presenting all that amid the cosy Victorian splendour of the Harold Pinter Theatre.

Rob Brydon, famous to millions (now) as that bloke off the telly, has been charming audiences with his warm avuncular tones since Marion & Geoff and Human Remains first aired over a decade ago. He's since become everyone's favourite Welsh, gay uncle thanks to his role as Bryn in Gavin & Stacey, a show which also revealed the Welshman to be in possession of a very decent singing voice, not least on the No 1 single version of Islands in the Stream he recorded with Ruth Jones.

In A Chorus of Disapproval, Brydon plays the 'ferociously zealous director', Dafydd, who oversees a production of The Beggar's Opera. Nigel Harman, fresh from his success in Shrek the Musical, plays the dashing young widower Guy who works his way through the opera's various male roles and the affections of the production's various women, including the director's wife Hannah, played by Ashley Jensen (Extras, Ugly Betty), before eventually being cast as the lead.

It's a classic tale of small-town rivalries, love triangles, envy and misdemeanour and it opens at the Harold Pinter Theatre in September.

Just to spice things up, we have news of limited-availability discounted seats, valid until 13th December 2012!

To take advantage, click on the Book This Offer button below.