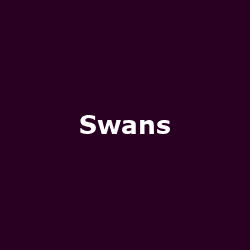 Take a listen to the trailer-flick for Swans' new limited edition extra disc included on their forthcoming album, 'The Seer'. Bump up the volume level. That, my friends, is an intense aural catharsis of white noise and emotion if ever there was one and reasonably typical of the lengths Swans go to when performing. And they've been nestling and wrestling on the fringes of alternative (whatever that is) music for nigh-on three decades, unleashing uncompromising gusts of atonal brilliance or perplexing symphonies of chaos, depending on your viewpoint.

Formed in 1982 by multi-instrumentalist Michael Gira, their hard-edged industrial beginnings drew in an ever-changing line-up of musicians and continually growing legion of admirers that hasn't compromised. Like a bleak sludge blues version of Sonic Youth or Black Flag, but slower, Swans' early inception seen on 'Filth', 'Cop', 'Holy Money' and eventually calmed down and morphed into the more acoustic and almost-commercial prospect that delivered 1989's 'The Burning World'. This temporary dalliance with producer Bill Laswell, proved to be something of a nadir for the band members but I'll stand up for it - 'Saved' is still a grand single 23 years later.

After splitting in 1997, it was thought that Gira wouldn't resurrect the Swans ideal again - but he did just that in 2010 and the band issued the long-awaited 'My Father Will Guide Me Up To The Sky'. For 2012, there's another treat in store for fans - the follow-up (of sorts). 'The Seer' is, according to Gira, a culmination of Swans' musical history and 30 years in the making. To promote the album, the band will be heading out on a global jaunt that will include just three UK shows.

The first stop is London on 15th November, followed by Glasgow on the 16th and finally Manchester on the 17th. We have tickets now, priced at £17.50 (Glasgow) or £20 (London and Manchester). 'The Seer' is released on 27th August.