WHY? to follow new material with clutch of UK 2012 dates

Posted: 28th June 2012
Yoni Wolf's genre-busting outfit are back with a six-track EP and a European tour, tickets on sale now 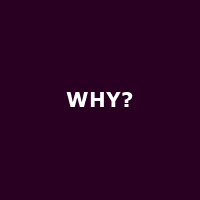 Cincinnati natives Yoni Wolf, Josiah Wolf and Doug McDiarmid are based in Berkeley in northern California yet recorded their new EP, Sod In The Seed, in Denton, Texas. A triangle drawn between those three locations would cover a large proportion of the continental United States with its chocolate box of cultures, styles, influences, accents and flavours.

Oddly, if conveniently, this goes some way to summing up a band which combines fairly traditional folk and indie guitar sounds with hip-hop. After setting out as a solo project for Jonathan 'Yoni' Wolf and releasing one album, 2003's Oaklandazulasylum, WHY? settled as a three-piece line up in time for the second record, Elephant Eyelash, released in 2005. Those intervening two years had seen WHY? develop an intriguing but reliable sound that has matured and continued to find a broader audience.

Sod In The Seed (listen to it in the Soundcloud player, above - you can also download it for free) will be released on the 13th of August and the title track suggests a up-tempo return to the hip-hop that was missing from the trio's fourth album, 2009's 'Eskimo Snow'. The new material sees WHY? once again blurring styles and resisting genre labels but it's perhaps best described as indie-folk hip-pop. Actually, it's probably best that you make up your own mind by taking in one of the forthcoming UK tour dates.

The UK dates of Why?'s European tour kick off in Hove on 8th October, followed by London, Manchester, Bristol and Glasgow, before the final gig at Oxford's Bullingdon Arms on 13th October. We have tickets available now, priced from £14 to £17.50 for the London show (Electric Ballroom).