Posted: 27th June 2012
BBC Worldwide's all-conquering Mr Tumble and the man behind him, Justin Fletcher MBE, will be joined by special guests for the huge shows - tickets on sale Friday 29th June 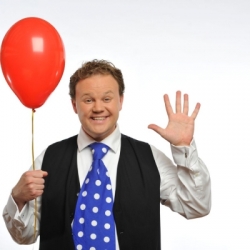 If you're thinking about having children but don't want to know the results; look away now. A whole new world beckons; one filled, eventually, with the excellent CBeebies channel and its undoubted superstar, one Justin Fletcher MBE.

He sings, he dances, he does sign language. He loves to dress up and likes nothing more than a bit of a silly song and dance. In short, Justin Fletcher would make the world's greatest babysitter. Not that you could afford him. Justin and his creations, most notably the charming numpty Mr Tumble, are insanely popular. Toddlers scream, mums swoon (at the prospect of some vicarious childcare) and everyone has a blumming good dad-dance in the aisles. Special guests from CBeebies enviable cannon of kids' telly superstars will be joining Justin and Friends to help ramp up the excitement even further.

Justin and Friends will be kicking off their road trip with a show at Newcastle's Metro Radio Arena on 31st March, followed by arena dates in Manchester, Sheffield, Birmingham, London and more, before ending with two shows at the Cardiff Motorpoint Arena on 13th and 14th April 2013. There are also two London shows; at Wembley Arena on 6th and 7th April. We will have tickets available from 9am on Friday 29th June, priced £22 for children and £25 for adults.

There is a saving available for adults when booking a family ticket for four (one must be a grown-up), priced at £88 (instead of £96 for two adults and two kids). Note that the 90-minute afternoon show, which includes a 20-minute interval, is unsuitable for children under the age of 18 months and contains amplified (loud) sound.