The Maryland death metal outfit follow the release of Reign Supreme with a clutch of September dates, tickets on sale now/Friday 22nd June 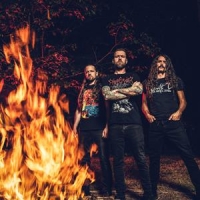 Some names really make you think. Like 'We Were Promised Jetpacks' or 'Benedict Cumberbatch'. Few, however, can be as troubling as American death metal band Dying Fetus. It leaves little to the imagination.

Their back catalogue is equally assertive, from 1996 debut Purification Through Violence to follow-up Killing On Adrenaline and the 2000 EP Grotesque Impalement. But, thought-provoking name aside, Dying Fetus are just another band cranking out indelible metal standards with unflinching regularity and no little quality. And most of the themes lurking amid the growls and screams are social and political; there's even a sniff of hip-hop influence here and there.

The band, still fronted by original member John Gallagher, have seen a wide range of personnel changes down the years (Gallagher is the only founder remaining) but this year's Reign Supreme has been the first of Dying Fetus's albums to be recorded with the same line-up as the last. Stability beckons for The Fetus.

Dying Fetus bring the From Womb To Waste Tour to the UK on 16th September with a date in Brighton, followed by shows in Norwich, Reading, Manchester and more before the final gig at Underworld in London on 23rd September. The Dublin gig is on 22nd September and support for all dates comes from Job For A Cowboy, Revocation and Cerebral Bore.

We will have some dates available now with the remaining tickets available from 9am on Friday 22nd June, priced from Â£13 for UK shows and â¬25 for Dublin.