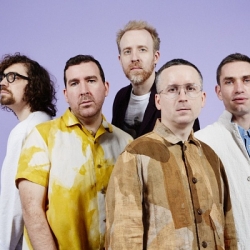 Intelligent-pop - what does it all mean? Lazy music journalists pick out a band member wearing a pair of glasses rather than drinking out of them and the terms 'geek', 'nerd' and 'brainiac' start to appear during features and reviews. Hot Chip must be pretty tired of it all by now, or maybe they just don't give a toss. But, it has to be said, the Londoners do set themselves up for critical analysis by dressing 'normally' and playing 'abnormal' electro-pop that borrows sounds, time signatures and titles from an otherworld of jazz, prog, '80s synth-pop and disco.

And bloody fair play to them - in truth, no-one sounds like them. Instantly recognizable for previous hits 'Over and Over', 'Ready For The Floor' and 'One Life Stand', Alexis Taylor and co have mined a successful seam of fidgety tunes with fragile vocals, fractured lyrics, cheery choruses (for the most part) and floor-filling beats in equal measure, which sometimes leaves casual listeners bewildered but most fans happy.

After the full-on perky disco throb found on previous album 'One Life Stand', Hot Chip have switched labels (EMI to Domino) and set about heading back to basics whilst retaining the ridiculously memorable hooks and tight funky beats that have become a trademark. The result, 'In Our Heads', was released in early June and earned the band another Top 20 placing, strengthened by the incessantly humorous club-smash, 'Night and Day'. Whilst mercifully not a cover of Cole Porter's sumptuous ballad, this 'Night and Day' contains the world-weary Taylor pronouncing a terse response that many DJs have returned to drunken tune-spotters hanging around their hallowed workspace bellowing requests, "I don't got no Abba/I don't play no gabba/I like Zapp not Zappa", "Do I Look Like a Rapper?" etc. Marvellous stuff.

So, probably best not shout out for any obscure b-sides when Hot Chip perform their next full UK tour in the autumn but instead prepare yourself for a spot-on night out. First stop will be Norwich on 8th October, followed by towns such as Leeds, Birmingham, Bristol etc until Brixton on 19th October. We will have tickets are on sale from Wednesday 20th June at 9am, with prices starting from £17.50.