Bloc Party to return with new album and autumn 2012 tour

Posted: 18th June 2012
The four-piece are releasing their latest studio record, Four, in August and following the launch with an October tour - tickets on sale Friday 22nd June 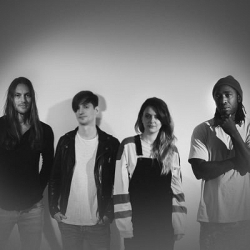 It's been nearly a decade since Bloc Party emerged from the London indie rock scene with their distinctive energetic take on a familiar genre. Topped with Kele Okereke's instantly recognisable vocal, Bloc Party provided a welcome antidote to the Clash/Buzzcocks shtick of The Libertines and their many imitators.

The 2005 debut release, Silent Alarm, was more than enough to get the indie music press twitching with excitement but it was the follow-up, 2007's A Weekend in the City, which cemented Bloc Party in the indie nation's affections and the all-important XFM playlists. Singles like The Prayer, I Still Remember and Hunting For Witches all become big hits, with The Prayer reaching No 4 on the UK singles chart. A fourth album, Four, is set for release on 20th August and it signals the end of a long period of studio time for Bloc Party, only broken this spring with the ongoing (relatively) intimate tour. A new batch of bigger shows will follow the new record this autum - an album preview of Four can be viewed above. Sounds fantastic.

The October tour kicks off at the Newcastle Academy on 12th, followed by gigs in Leeds, Glasgow, Birmingham and more, before the final date announced so far at the Corn Exchange in Cambridge on 20th October 2012. The Manchester show on 19th October is part of the Warehouse Project. We will have tickets available from 9am on Friday 22nd June, priced from £23.50 with more dates likely to be announced in due course.

Ahead of the tour, Kele and co are playing a few healing gigs this week (all sold out - we have spme Premium tickets available) and a selection of summer festival dates including Bilbao BBK Live 2012, Mallorca Rocks 2012 and Ibiza Rocks 2012 . We have tickets available now for the three Spanish slots.