Book tickets to see Sister Act at Woking's New Victoria Theatre and get over 35% off! 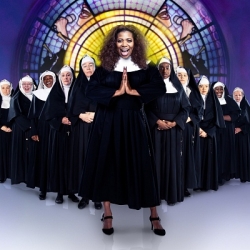 It really is literally time to sing 'Hallelujah' because this exciting award-winning musical, based on the smash-hit film originally starring Whoopi Goldberg, is currently touring the UK until the end of the year. The family-friendly, good-time show features a string of soul, funk and disco classics and the hilarious escapades of dancer-turned-nun, Deloris Van Cartier.

The unlikely street-wise Deloris is admitted to a convent to protect her identity after witnessing a murder and becomes part of the convent's choir. Hymns turn to funk-soul classics and the pursuing gang turn into history, all according to the gospel of St Fun.

Sister Act The Musical will be performing around the UK and is due to play in Milton Keynes, Cardiff, Glasgow, Manchester and Birmingham, as well as Woking from 28th August to 8th September, for which we have an exciting money-saving discount to tell you about!

To take advantage of these great savings, click on the Book this offer button below.