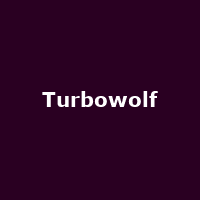 There's a terrific picture currently uploaded onto Turbowolf's Facebook timeline of an older geezer being carried over the mosh-pit at one of the band's notoriously joyful shows (Berlin in this case - he's called Gottfried, by the way. Looks like a legend). This probably says more about Turbowolf than anything else you might read in some lame biog or blog on t'internet - this says 'respect to all ages and types'. Even the slightly crazy ones.

Listening to Turbowolf's infectious sprawling squall of psychedelia, funk, rock and roll, you can understand why they've been attracting a broad cross-section of fans. If Iggy Pop recorded a mash-up with early Soundgarden, MC5 and Them Crooked Vultures chucked in, you'd be someway closer to pigeonholing this Bristolian powerhouse. Give 'Let's Die' a whirl - it's a ballsy little slice of rough and rustic garage-rock with gutsy vocals from Chris Georgiadis and a bit of oomph from the others. I doubt it'll get on Radio 2.

Although Turbowolf have been active since 2008, it was only last year that their warmly-received debut-album appeared. 'Turbowolf' contains a slew of buzzed-up Turbo-charged blasts of hi-octane ear food that wouldn't sound amiss at a drag-racing meet or a soundtrack involving sleazy bars and greasy cars (or should that be the other way around). But rather than attempt to understand such blathering, you ought to check them out in person.

Their next actual gig is as support to fellow canine devotees Wolfmother at the IndigO2 on 6th July, for which Â£22.50 will still get you a ticket (it's bound to sell out soon though). Then the band are heading off to various festivals - 2000 Trees, Truck, Standon Calling, Y Not to name but four - before heading back out on the road for a full UK tour in October.

First stop is Newcastle on 2nd October, followed by Glasgow, Sheffield, York and several more including London's Garage on the 10th, before hitting their home-turf of Bristol on 19th October. We have tickets for all shows, all priced at under Â£10!