Opeth to bring their Heritage for autumn 2012 UK tour 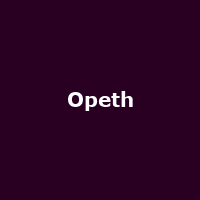 Celebrating their glorious 22nd year in existence as a band, the formidable Opeth have been hammering, growling and causing seismic tremors across the globe with an almost relentless regularity. But success eluded the metal outfit for a decade or so before founder Mikael Åkerfeldt saw his beloved band's name on festival flyers and album chart rundowns and even then, the States were still six or seven years behind until 2008 saw a big breakthrough. So, not your usual 'head out on the highway' types, then.

Opeth are not your average hollering heavy tribe of darklords - they mix folk, jazz and classic rock into their music, best consumed loud and even better heard and moshed to at a huge gathering, like this year's Download. Prior to their more recent success, the group pretty much struggled on scraps of critical acclaim with albums such as the 1995 debut set 'Orchid' and 'My Arms, Your Hearse', an album that became a familiar template for future recordings, plus a wider audience. Finally in 2005, their Swedish homeland embraced the album 'Ghost Reveries', followed by the rest of Europe and by their last album, 'Watershed' in 2008, Opeth were celebrating a #1 position in Finland.

Newest studio set 'Heritage' has achieved similar, if rather more consistent, results with the UK's fan-base helping it frighten the likes of Adele for a few minutes, before settling for an impressive no.19. With such apparent fervour surrounding the Swedes, Opeth have announced a UK tour in November, which will include two exciting ingredients.

Firstly, you'll get a decent and established support act in the form of Anathema (who are capable of selling out their own headliners) and secondly, for one night only, Opeth will perform an acoustic show at Islington's Union Chapel on 16th November. The remaining full electric shows will include Nottingham on 12th November, plus Glasgow, Dublin, Leeds and finally Portsmouth on the 17th. We have tickets available for all shows right now, priced at £18.50 (or £20 for London and 32.50 for Dublin).