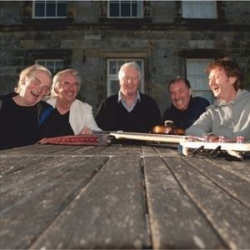 Naming yourself after a cumbersome two-wheeled method of car-drawn transportation, betrothed by Mr and Mrs Pleasant of the Wolds and despised by the likes of Jeremy Clarkson - that's surely never going to work, is it? Actually, when applied to the free-wheeling progressive Canterbury-based rock outfit formed in 1968, it's likely to be 'caravan' meaning romantic Romany carriage or an idyllic image of luxurious Egyptian desert travel, not a 'SpeedKing' or 'Ambassador' with a wonky hob and a mind of its own.

Actually, this Caravan has been a stable ride for the best part of 45 years and continues to represent the hazy days of the Canterbury scene of the late '60s with continually sold-out shows and a respectable back-catalogue of psychedelia, jazz-rock and prog. Founder members Pye Hastings, Richard Coughlan and Geoffrey Richardson remain with the band, surely an important factor when performing the classics they are famous for. Rather than hit-singles, Caravan specialized in the album experience (it was de rigeur in the late '60s). Their self-titled debut, the follow-up 'If I Could Do It All Over Again, I'd Do It All Over You' and the landmark third, 'In The Land of Grey and Pink', have all cemented an enviable reputation - who's to say they won't make it to 50?

They haven't released many albums of late, the last studio set being 2003's 'Unauthorized Breakfast Item'and have remained largely unsung, reissue-wise. Thankfully this trend was reversed last year when 'In The Land of Grey and Pink' was given the 'redux' treatment. Will the same be happening again, this time with 1973's cheekily-titled 'For Girls Who Grow Plump In The Night'? The odds are good - the band will be embarking on a 2013 tour from January onwards!

So far, Caravan have confirmed a string of shows, starting with London on 8th January, with others including Cambridge, Wolverhampton, Gateshead and more before heading west to Tavistock and Bridport. Tickets are available now, priced from £20-£22.50.