Posted: 12th June 2012
The Lord of the Mince returns with love on his mind, tickets on sale now 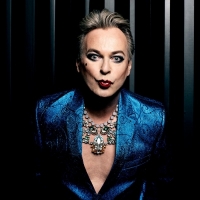 Being an outspoken type of chap, Julian Clary has never been known to mince his words... er hang on, that came out all wrong... oops, so did that. And that's the problem when even mentioning this man's name and repertoire - he brings out the smutty side in all of us. Entendres? Make it a double. His previous shows include 'The Mincing Machine' and 'My Glittering Passage' and Channel 4, in all their ground-breaking and controversial glory for the time, allowed the comedian to name his TV gameshow, 'Sticky Moments with Julian Clary'.

Currently in his 52nd year, Clary shows no signs of slowing down and why should he - there are far too many people out there who weep in hysterics at his outrageous humour. To prove this, he has a 2012 tour planned. Entitled, 'Position Vacant - Apply Within' (you see? He just can't help himself...), this new show sees the lovelorn Julian looking for love.

To quote his press release, "Because I'm still considered to be quite a catch and because your town is noted for its heterosexuals on the cusp, there's bound to be stiff competition", says Julian. "Therefore I'll be hosting ruthless elimination games. You can be sure of one thing. By the end of the evening, we'll all be celebrating my new partnership."

The tour will include Barnstaple, Truro, Norwich, Crawley, Sheffield, Perth, Cardiff and many other far-flung romantic locations, concluding with two shows in Shepherd's Bush on 22nd and 23rd November. Prices range from £20 upwards.