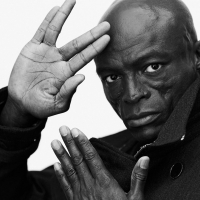 It's been 22 years since Seal first appeared on our screens, on Top of the Pops and The Chart Show, as a rotating, singing, disembodied head mouthing along to the words of producer Adamski's hit single Killer.

The song, co-written by Seal, topped the UK single charts for a month and, for a while, it seemed like Seal might struggle to break out of the role as session vocalist. Eight studio albums and a supermodel wife later, we couldn't have been more wrong. Shortly after Killer, Seal released Crazy, his biggest solo hit which charted at No 2 - the first of seven consecutive Top 40 hits (including a Seal-only version of Killer).

Tracks including Prayer for the Dying and Kiss From A Rose, both taken from the album Seal II, cemented the singer's place as a popular soul artist in the UK, across Europe and America and around the world. A performer of genuine global appeal, Seal has continued to chart regularly, appear on high profile film soundtracks and, until their split earlier this year, appear frequently on the red carpet with wife Heidi Klum as one of showbusiness' more glamorous couples.

Seal's eighth studio set, Soul II, was released in late 2011 and the collection of classic soul covers fuelled another global jaunt and chance to air an impressive back catalogue. The fun continues with a new tour announced for later this year.

The first UK date is in Bournemouth on 5th November, followed by a Hammersmith Apollo show the next night. A month later, Seal returns with a gig in Wolverhampton (8th December) and then finally the Manchester Apollo on Saturday 9th December 2012. We will have tickets available from 9am on Friday 15th June, priced from Â£35..