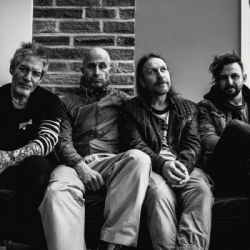 Around a decade ago, the Bradford-based rock outfit were busy clocking up the last of around a dozen Top 40 hits. Best known for their No 2 smash hit Tequila , Terrorvision were, are, so much more than a one-hit wonder.

In fact, pre-millennium yoof telly montages of drunken festival goers raising plastic cups (of cider) in honour of Terrorvision's ode to Joe Cuervo's moonshine may have put the band in the headlines (and on Radio 1) but the rock outfit from West Keighley were always so much more.

Their discography confirms as much. Their second album, How to Make Friends and Influence People, released in 1994, spawned five UK hit singles, all of which made the Top 30. The record itself peaked at No 18 (back when that was a big deal). Follow up, 1996's Regular Urban Survivors, registered five more Top 20 hits, including the No 5 single Perseverance. All of which was three years before Mint Royale mixed Tequila into a No 2 hit.

So, yes, they are the 'Tequila' band, and they do like to party, but their English rock is so much more than a one night stand that reeks only of salt, lemon and lime. If you want proof, there's an autumn tour lined up, kicking off in Wolverhampton on 11th October, followed by shows in Bristol, Newcastle and more before the final date announced so far at the HMV Ritz in Manchester on 27th October.

We have tickets available now, priced from just £15. The tequilas are on you.