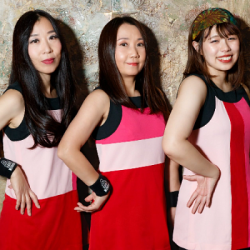 With underground DIY punk ethics being readily mentioned in various 'Punk Britannia'-related documentaries, radio shows and exhibitions at the moment, spare a thought for women in the new-wave scene back in the '70s. There weren't nearly enough of them, save for Siouxsie, Poly Styrene, Patti Smith, Debbie Harry and bands such as The Slits and Kleenex, although one band on the other side of the world was readying itself to remedy the situation.

Japan's musically eccentric reputation continued throughout the '80s with the gradual expansion of its homegrown 'J-Pop' scene. YMO (Yellow Magic Orchestra) admirably and internationally pulled the intrinsically guitar-based genre into the electronic age, while other musicians preferred to rock. Shonen Knife formed in 1981 and preferred to distance themselves from any scene by cranking up the amps, absorbing ideas from the UK and US punk scenes (The Buzzcocks and Ramones are an obvious comparable) and dishing out their own early take on 'girl-power'. If The Shirelles had been around during 1977, they might have sounded like this.

After several years, Shonen Knife's first break came in 1986 when American rock 'n' grunge icon, Sub Pop, snuck a song of theirs onto a compilation album, 'Sub Pop 100'. There followed a tidal-wave of admiring labels, artists and DJs offering lucrative deals, sessions and kind words, not least John Peel, Kurt Cobain, Sonic Youth and Creation Records, who inked a deal for them to issue 1993's 'Rock Animals'. The perky Japanese trio certainly brightened up NME etc, but their time passed all too quickly and the '90s turned into Britpop-a-go-go.

However, back home, Shonen Knife continue to sell well, with added interest from the States continuing right up to the present day. The Simpson's creator Matt Groening chose them for his All Tomorrow's Parties weekend in 2010 and tours often result in sold out shows. For 2012, the girls return with new member Emi Morimoto and a new album entitled, 'Pop Tune'. You can watch the title-track's predictably quirky video in this article, before gleaning tour date information below.

First stop is Shoreditch on 1st October (with Wussy and American Werewolf Academy), followed by Manchester, Nottingham and more until Bristol on 10th October. We will have tickets on sale from Friday 15th June at 8am.