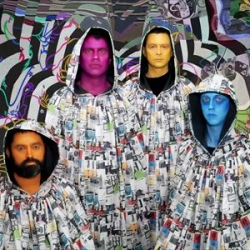 You cannot accuse Animal Collective of ever having been 'just another alternative psychedelic band'. For a start, they don't stick to the same line-up too often, veering from duo to trio to quartet and initially prone to wearing disguises on stage, running their own record labels (now currently Paw Tracks) and creating far-out and far-reaching music that cannot simply be pigeonholed as 'psychedelic'. Or anything. The band obviously share some interest in the likes of Can or Cluster, yet have the rhythmic hallmarks of Eno and Beefheart and a penchant for, well, changing tack.

To this end, Animal Collective have a following bordering on geek. Next week sees the release of a 7"-only single, 'Honeycomb' via Domino, the type of limited edition that will sell out in seconds. Their most recent UK activity beforehand was their own ATP (All Tomorrow's Parties) bash in Minehead last year - they chose Lee Scratch Perry, Gang Gang Dance and Ariel Pink's Haunted Graffiti, amongst other guests to provide a weekend of earnest leftfield madness. And new album 'Centipede Hz' contains song titles that might double up as novels by Philip K.Dick or William S.Burroughs. 'Applesauce' and 'Moonjock' anybody?

Critical acclaim from the UK music press initially came their way via 2009's 'Merriweather Post Pavilion'. Pretty much every magazine fell over its own adjectives and superlatives to describe it, with Uncut declaring it as 'an album of the century'. Big words indeed. And perhaps even bigger accolades will be adorning Animal Collective's bulging CV by the time their 2012 album gets its release. 'Centipede Hz' is due out in September, just a few weeks before the Maryland quartet regroup for some live action.

The band will perform three UK shows in November, starting initially with London's Roundhouse on 4th November, before heading up to Glasgow on the 7th and then to Manchester on the 8th. We will have tickets on sale from Friday 15th June, with prices averaging around £20 for London and £18.50 for Glasgow and Manchester. More UK shows may be added in due course so favourite this page for updates.