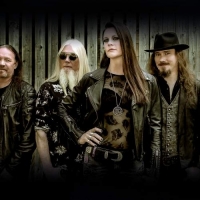 Finland's most familiar musical exports in recent years were growling metallers Lordi, who brought an element of much needed theatre, fun and rock to the Eurovision Song Travesty in 2006. And a then-record 292 points to win the thing for the first time in Finnish history. It certainly didn't do the band or their homeland any harm - Lordi ended up performing at Ozzfest and touring with Type O Negative and Finnish, nay, Scandinavian metal received an injection of interest and rightly so.

Lordi actually formed in the same year as their fellow countrymen and woman, Nightwish, who have a record of their own to boast - they are currently Finland's most successful band abroad and have shipped 9 million units in total with 8 million divided up amongst Germany, Sweden, Poland, Austria and much of Eastern and Northern Europe. Although they haven't quite crossed over their symphonic sound to the UK yet, I can vouch for their popularity over the years, having witnessed first-hand, sales of their 2004 triple-platinum album 'Once' reaching higher numbers on the day of release than Keane and Faithless, who were at the time battling for the number 1 slot in Virgin's album charts. A few days later, of course, fortunes changed and the band's album slipped out of the Top 100.

After switching lead singers in 2007, Nightwish released their biggest-selling album to date. 'Dark Passion Play' was #1 in four countries and a Top 10 hit in several others, also becoming their first UK success later that year. The album certainly benefitted from the band's biggest world tour to date and set them up nicely for their most recent committal to digital and plastic - 2011's 'Imaginaerum'. Sure enough, the new album has continued to spread the Nightwish reputation, with respectable sales in the UK and a break in the US.

All this success has warranted some UK tour dates and so not surprisingly, Nightwish will return to Blighty with four autumnal shows, starting with Manchester on 4th November, followed by Brixton, Birmingham and Glasgow. We will have tickets on sale from Friday 15th June, priced at £18.50 (or £20 for London). Demand will be high.