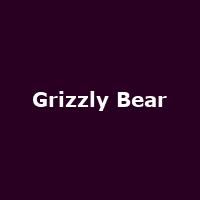 After forming some eight years ago, the rise of Brooklyn's unique Grizzly Bear has been a slow but steady one. Key songwriter Ed Droste gathered the band together in 2006 as a means of adding another dimension to his own previously issued solo Grizzly Bear project, "Horn of Plenty". Acclaimed by Rolling Stone magazine and beloved of many UK critics, Warp Records had heard enough in that one album and signed him and his new musicians a couple of years later.

Impossible to pigeonhole and definitely of the 'left-of-field' and BBC 6Music fraternity, Grizzly Bear have since issued several eccentric records such as their Warp debut "Yellow House" and a plethora of 12" singles, all an unworldly array of so-called anti-folk, alt-folk or any other folking folk you can try to apply to their sound. Their most recent set, "Veckatimest" in 2009, shifted enough copies to scale the Top 20 US Billboard Chart, which in this day and age of bland pop is quite an achievement. Over here in the UK, Jools Holland invited them onto his Later... show which resulted in the album bedding in at #24.

And so to 2012 and the long-awaited return of Warp's non-techno alchemists. As well as a brand new, as yet untitled, album set for release on 17th September, Grizzly Bear will be embarking on a worldwide haul around the globe, which naturally involves stopping off in dear old Jubilee-soaked Blighty. Keep your bunting flying for summer shows in Cambridge, Nottingham, Stradbelly (Ireland's Electric Picnic Festival) and Salisbury (the city's End of the Road festival), before the band head back to the States. These are all available now.

After a couple of months, they will return for another handful of UK shows including Gateshead on 17th October, followed by Manchester, Glasgow, Coventry and finally on 22nd, Brixton. This batch will go on sale via us from 9am on Friday 8th June and is expected to usher in a wave of quick purchasing!