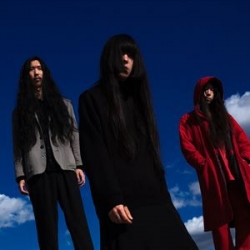 You know you are not dealing with any ordinary band when quotes and song-titles about Japan's Bo Ningen from the internet scream almost as loudly as their music.

"You have been warned" follows an announcement about appearing in session on Marc Riley's BBC 6Music show. "..a whirlwind of distorted no-wave riffs" was how blog-site The Londonist described their live show.

To these ears, they sound a bit like Acid Mothers Temple (and a few other Far East fuzz-rock specialists, to be fair) and they've recently supported The Horrors on a UK tour. Blimey. Oh and they have a song called "Bang Your F**king Head", which is actually what you end up doing after a few seconds of their gorgeous cranium-splitting racket. Imagine if Jack White AND Hawkwind were forced through a cheese-grater whilst still playing guitars and drums and singing. Now turn that up. Yep, that's about right.

But, if you think Bo Ningen are yet another bash-bash-bash bunch of long-haired hippies with a penchant for squealed vocals and eyeball-juddering mind-melting bluster, you'd only be partially right - they can knock out a melody (somewhere in the foggy fug of feedback). Their name doesn't come from the Swiss town of Boningen, but actually translates as 'stick man' and they've just recently carved out a collaborative album, "Foreign Affair Confidential", with Damo Suzuki, who isn't impartial to scaring the neighbours either.

In October, the band hope to have a new studio album already released in time for their full UK tour which kicks off in Bristol on the 8th, before continuing on to Southampton, Brighton, Cambridge and many more before setting down in Liverpool on the 28th. Tickets are available now, priced from £7.

Can't see a London date on that schedule? Worry not as the band are performing a special exclusive gig at the Hotel Street bar in Charing Cross Road on 16th June, with tickets at an unbelievable £3 (THREE POUNDS!). Get in.