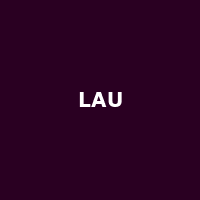 In just eight short years, the Edinburgh-founded nu-folk assembly that is LAU have quite rightly been busy buffing those BBC Folk Award trinkets that were gleaned during three consecutive years. But that trio of trophies hasn't distracted the likeable band from banging out more albums or playing more shows around the British Isles, in fact the various members of the band have been busy garnering acclaim and props from anyone who listened.

Orcadian vocalist and guitarist Kris Drever is also in possession of a BBC Folk Award (2007's Best Newcomer, no less), while the other members of the core trio, Aidan O'Rourke from Oban and Martin Green of East Anglia have been just as prolific. As a collective trio, LAU have been busy working up an artistic sweat with a follow-up to the 2009 album "Arc Light" and it's preceding debut-album "Lightweights and Gentlemen". 2012's "Race the Loser" is expected in September and may just see the band notch up some more awards.

They've certainly confirmed enough live shows to warrant kipping in plenty of hotel beds or mate's sleeping bags because most of their summer is taken up with touring. Festivals play a major part with the pick of the biggies to include the Cambridge Folk Festival, Shrewsbury Folk Festival, Shambala and the Rhythm Folk Festival.

But it's their later autumn headliners that will swing their followers, starting with London's enigmatic King's Place on 18th October and followed by Dublin, Sligo, Inverness, Aberdeen and other Scottish dates before heading south to Leeds, Sheffield etc until hitting the West Country in Bristol and Exeter in mid-November. Tickets are on sale now, priced from around £12.50.