Slade and Sweet announce a crazee blockbuster of a UK tour

Posted: 25th May 2012
Two glam-rocking giants from the '70s on one bill, tickets available now 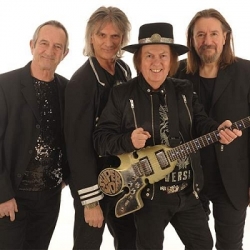 Whether you are old enough to remember the West Midlanders first time around when fronted by the ever-cheery Noddy Holder and the fringe-challenging Dave Hill, or you became aware of them via Reeves and Mortimer's playful TV comedy-parody sketch, 'Slade in Residence' (complete with Mortimer sporting a badly cut Hill hairline and endless references to Cup-a-Soup), Slade are national rock treasures. You will definitely know them for 'Merry Xmas Everybody' - the festive stomper has had around six reissues since 1973 and never fails to instil joy or dread, depending on your attitude to Christmas.

Perhaps unjustly lumped in with glam-rock during their early heyday, Slade's rivals could barely muster more than one decent album and, with the exception of Marc Bolan and David Bowie, the genre's sparkly bubble burst just prior to punk's unruly installation. However, Sweet were, well, sweet. Not only did they sport proper multi-coloured onesies, perfectly-coiffured barnets and obligatory silver stack-heels, Sweet had plenty of stonewall party bangers that started with candy-coated pop-fluff like 'Funny Funny' and ended with 'Wig-Wam Bam', 'Hell Raiser', 'Teenage Rampage' and 'Ballroom Blitz', all of them Top 5 hits and all pre-empting punk by sounding like a Sex Pistols tracklisting. But if pressed to name a signature tune, 'Block Buster!' has to be the one. The eerie sirens, the maniacal harmonies and the infamous hook-line, "We just haven't gotta clue, what to do", the song clung to the #1 spot for dear life in 1973, before giving way to, yep you've figured it, Slade ('Cum On Feel The Noize', in fact).

Putting the two bands on the same bill, even if Noddy Holder is no longer fronting Slade, is a glam-rockin' given - it's got to be worth it, right? Slade and Sweet will be joining forces for a majestical romp through their respective heydays as part of a go-see tour in the autumn, starting in Folkestone on 7th November. Other confirmed shows include Manchester, Birmingham, Southport, Torquay and Stoke-on-Trent and tickets are on sale now from us, priced from around £25 upwards. More shows may be announced in due course.