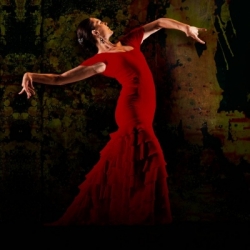 Flamenco's traditions have often been associated with the Spanish region of Andalucia, growing from its Iberian roots over the past few centuries and evolving into a worldwide phenomenon. Yet the true origins of Flamenco have been discussed at length, with many 'experts' claiming that the music was partly born out of North Africa, India and, of course, Southern Spain. The dazzling mix of singing, mannered dancing, acoustic guitar and obligatory handclaps point to all sorts of sources, so let's assume that Flamenco is just superb to watch and breathtaking (literally) to perform. And nobody does it better than Paco Peña.

Hailing from the Andalucian city of Córdoba and fast approaching his 70th birthday, Peña is something of a legend both in Spain and internationally. He moved to London during his 20s and became a hit at a Covent Garden restaurant, before eventually filling the Royal Albert Hall and Carnegie Hall in New York. His repertoire often extends beyond plain and simple traditions, such as his collaborations with Chilean group Inti-Illimani and classical guitarist John Williams. Since 2010, Paco Peña has been focusing on a new piece called 'Quimeras', a fusion of African and Flamenco music - and it's coming to London for a run of several shows.

In the autumn, Sadler's Wells in Islington will host an eight-night residency by the acclaimed guitarist and his Flamenco Dance Company, performing this new story about Peña's own experiences of his home region's mix of cultures drawn from North African immigrants and Southern Spanish life. The result is a heady mix of African rhythms and Spanish music, driven by the fire and passion of Flamenco music. Originally premiered two years ago, this run marks a triumphant rediscovery of one of the world's most engaging performances from the world's most exciting Flamenco guitarist and performer.

'Quimeras' will run from 23rd November to 1st December 2012 and we have tickets available now, ranging from £12 to £38, depending on seat location.