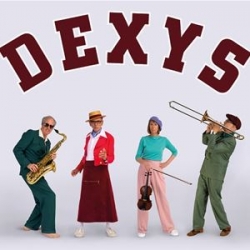 If the name of Dexys Midnight Runners conjures only thoughts of wedding disco floor-filler Come On Eileen then you don't even have half the story. It's true, of course, that Kevin Rowland and 'Dexys', as they are now formally known, were the group behind that particular worldwide eighties No 1 smash hit, and another in Geno, but neither alone does the band any sort of justice.

Dexys, with or without said Runners, have always managed to tread the fine line between authenticity and commercial appeal. On one hand, Come On Eileen is the one-size-fits-all sing-along of town centre nightspots the land long. On the other, the arrangements and pure musicality on show in tracks like Plan B or Liars A to E is nothing short of breathtaking. Aside from the two big chart-toppers, Dexys also popped up a good few times on Top of the Pops with tracks like Show Me and Jackie Wilson Said [insert true story about the Jocky Wilson stage poster].

But, dig deeper and you soon unearth the bluesy heart of a thoroughbred band whose exquisite horns and strings were a tight, sharp counterpoint to Kevin Rowland's remarkable vocal; every word heartfelt, every syllable an embrace of warm sadness. Yes, there is love for Dexys and for Kevin Rowland and, after too long, the band are back with a new record, One Day I'm Going To Soar (released in June), and a headline jaunt.

The tour begins with a date at the Cambridge Corn Exchange on 11th September, followed by shows in Birmingham, London, Gateshead, Brighton and more before the final gig at the New Theatre in Oxford on 25th September 2012. The London date is at the Barbican on 16th September. We will have tickets available from 9am on Friday 25th May.

Ahead of the autumn gigs, Dexys are also playing Latitude 2012 on Friday 13th July. We have weekend tickets on sale now, priced £175.