Posted: 22nd May 2012
Eclipsed By The Moon shows to feature entire album and other Floyd classics, tickets on sale Friday 25th May 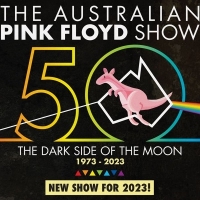 There are albums and there are best-selling albums. And then there are iconic best-selling albums that appear in the broadest cross-section of LP/CD/MP3 collections, never ageing and always contemporary. The 1970's may have been a dismally depressive decade (certainly the first half was - you couldn't play any hi-fi systems due to the frequent power cuts), but glimmers of hope and chinks of light occasionally peeped through the gloom to brighten student digs and family lounges, up and down the nation. One such album issued in 1973, alongside huge titles such as Mike Oldfield's 'Tubular Bells', Bowie's 'Aladdin Sane', Led Zep's 'Houses of the Holy' and Stevie Wonder's 'Innervisions', soundtracked more than one generation - 'Dark Side of the Moon'.

If you've ever attended a pub quiz and failed to recall who the creators of this amazing piece of work were, you're clearly not of this world. Pink Floyd weren't new to music in 1973, nor were they new to releasing albums - 'Dark Side of the Moon' was actually their EIGHTH full-length set. Having previously knocked out mind-melting psychedelia since 1967, the Floyd took a sharp change in direction with DSOTM, gambling with song structures and less in the way of epic instrumentals.

The fifteen-times platinum release is still one of the few albums that you can put on right from the beginning of 'Speak to Me' and enjoy uninterrupted until the final strains of 'Eclipse' fade out, some 40 minutes later. They even had a hit with 'Money', a song that became something of a signature tune in later years and a recurring theme with Gilmour, Wright, Waters and Mason's bank-accounts. While Pink Floyd continue to be on a collective and, for the fans at least, frustratingly long (permanent?) hiatus, tribute acts from across the globe continue to mine the seam of progressive landmarks set down by the band, although one band has had the honour of being endorsed by David Gilmour.

The Australian Pink Floyd Show has performed at Gilmour's 50th birthday party, which tells you something about just how accurate, professional and, above all, highly-regarded the band is. Aussie Floyd singer Steve Mac probably couldn't believe his luck, singing his idol's classics while the vol-au-vents were being handed round. It's fitting, therefore, that the Floyd from Down Under will be returning to our shores next year for a celebration of that classic 1973 album.

The Eclipsed By The Moon 2013 Tour will celebrate 40 years of 'Dark Side of the Moon' with all the pomp, pizzazz and perfection you'd expect and will tour the UK during February and March, starting in Liverpool on 8th February and followed by Newcastle, Aberdeen, Swindon, Cardiff, London's O2, Edinburgh and loads more until the (currently) final show on 3rd March in Sheffield. We will have tickets for the shows from 9am on Friday 25th May, priced from £29.50 upwards. The band have also hinted at a major UK festival appearance in the coming months - can you guess which one?