Posted: 21st May 2012
The Buffalo five-piece are bringing their latest record to the UK, supported by Stray from the Path and Last Witness, tickets on sale Friday 25th May 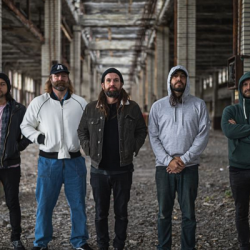 Every Time I Die have a reputation for playing every gig as if it were their last. Intense, energetic, raucous sets which kick off like a fight breaking out in the dark.

It's been 14 years since brothers Keith and Jordan Buckley formed 'ETID' in Buffalo, New York, and, with guitarist Andy Williams, have formed the backbone of the band ever since, carving out that reputation as live performers. In that period, they've released six studio albums of metalcore, the last of which was March's Ex Lives.

It has been their best performing record to date, clocking up a Top 20 spot on the US Billboard 200 but that is only part of the group's success. Like any 21st century band worth their salt, ETID have also chopped out a tasty career in film and game soundtracks; adding their tunes to the incidentals on some of the Saw franchise of movies, the Guitar Hero games and PS3's MotorStorm.

The tour kicks off in Southampton on 24th October, followed by dates in Bristol, Brighton, Manchester, Glasgow and more, before the final gig in Sheffield on 4th November. There is a London show at the Electric Ballroom on 29th October. We will have tickets from 9am on Friday 25th May, priced £16 for London and from £14 for other venues.

Ahead of the autumn tour, ETID are also appearing at the Slam Dunk Festival 2012 this coming weekend (26th/27th May), at the universities of Leeds and Hertfordshire. The Hatfield date is sold out but we have a few Premium tickets available for the Leeds gig on Saturday.