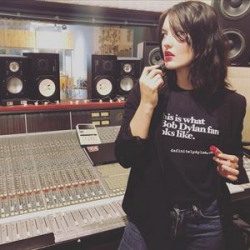 If you gawped at one of the more recent instalments of Later with Jools Holland, you may have stumbled across a singer who could actually sing. In tune. No auto-tuning. No frills and no fancies. Tom Jones must have been impressed with the girl being dubbed as Salford's Patsy Cline, as indeed might the remaining guests who blustered, shouted, withered and clattered their way through an indescribable babble of non-music. With the possible exception of neo-funk fidgets Django Django, Harvieu at least sounded refreshing. Fair play.

We've only just finished previewing her recent tour, back in April, where she successfully cleaned out supplies of tickets with casual abandon, plus she wowed many at the recent Live at Leeds festival and Newcastle's Communion Unplugged bash. It surely won't be long before she's walking up the steps at the BRIT Awards to covet Best Singer or, perhaps, Best Album - her debut studio set is due for release this week.

'Through The Night' promises to be a grown-up affair with the inclusion of Ed Harcourt and former Duffy stooge, Jimmy Hogarth as songwriting support. Not that Harvieu can't put finger to iPad/pen to paper - she's co-written a quarter of the album herself, which includes the recently released title track.

To celebrate this release, Harvieu will also be touring in the autumn, but beforehand Ren will be playing a limited-capacity acoustic show at London's St Pancras Old Church NEXT Wednesday (30th May). A tiny amount will go on general sale on Thursday morning at 9am, priced at £12.50.

Should you fail to be one of the lucky 100 applicants for St Pancras, there's always that all-important autumn tour, starting with Glasgow on 7th October, followed by Gateshead, Manchester, Shepherd's Bush and more until Bristol on 16th October. Again, all these shows will be on sale via us on Thursday morning at 9am, priced at £12-£14.