Posted: 21st May 2012
The Californian four-piece will release Collide With The Sky in July and hit these shores in September, supported by Crown the Empire - tickets available from Friday 25th 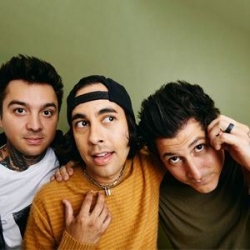 Pierce the Veil, the post-hardcore four-piece from San Diego, are coming to the UK for their first ever headline tour here, supported by some hardcore Texans in Crown The Empire. Brothers Mike and Vic Fuentes effectively launched Pierce the Veil in the late nineties when they first started making music together as Early Times, borne of the local punk scene.

As Early Times became past Times, in 2006 the Fuentes siblings recruited Jaime Preciado and Tony Perry on bass and lead guitar respectively and formed Pierce the Veil, delivering a debut record A Flair For The Dramatic just a year or so later. The album was recorded entirely by Mike and Vic Fuentes but Preciado and Perry assumed live duties and Pierce the Veil found a wining formation. After the 2010 follow-up, Selfish Machines, the band have now revealed their third studio LP will be released this summer. Collide With The Sky is set for release in mid-July and precipitates Pierce the Veil touring the US as part of the 2012 Vans Warped Tour before their debut UK headline dates later in the year.

Pierce the Veil, supported by Crown The Empire, kick off their autumn tour in Leeds on 16th September, followed by dates in Newcastle, London, Manchester and more before the final date in Kingston on 28th September 2012. The London date is at Underworld in Camden on 21st September. We will have tickets available from 9am on Friday 25th May, priced just £10.