Posted: 3rd September 2012
The Brit-nominated one-time internet sensation is following the release of Flesh and Blood with an autumn jaunt (tickets now on sale) plus a free London album-launch gig on 20th September 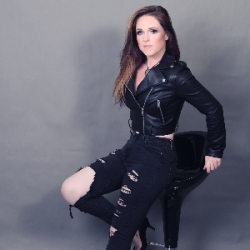 It's been six years since the music industry was divided by the very modern fairy tale of Sandi Thom's rise to fame. For some, it was the culmination of a cynically orchestrated publicity campaign. For (many) others, it was a just reward for a singer and songwriter whose early promise had met with indifference when labels had tried to hawk her music to a wider audience.

The story, as you may well recall, is that, dismayed by her inability to generate sufficient interest in her songs, Sandi Thom began streaming gigs from her basement flat in Tooting. Online audiences soon rose from just a handful to more than 50,000. In 2006, that was more than enough to generate considerable column inches. Although it had made little impression upon its original release, Thom's single 'I Wish I Was a Punk Rocker (With Flowers in My Hair)' was soon propelled to No 1. The album it was taken from, 'Smile... It Confuses People', also topped the charts, turning triple-Platinum and selling a million copies in the process.

Sandi Thom's two subsequent albums made less of an impact but the outstanding success of her debut record is surely more than sufficient to silence any doubters. And if you're one of Ms Thom's many fans, then there's the good news that the singer is heading out on a UK tour later in the year to promote her latest LP, the Rich Robinson (Black Crowes) produced new studio album 'Flesh And Blood'.

The autumn tour kicks off at the Islington Academy on 1st November, followed by dates in Gateshead, Liverpool, Glasgow and more, before the final gig at The Met in Bury on 15th November 2012. We have tickets available now, priced £17.50 for London and from £12 for other venues. 'Flesh And Blood' is set for release on Monday 17th September and Sandi's also playing a one-off Gibson Guitar Studio gig in Camden on 20th September.