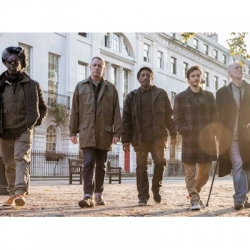 In the mid '90s, as the final flickers of rave's dying embers burned out like the proverbial herbal 'remedy', music was a sorry mess of Britpop, Camden and the emergence of (ugh) pop-punk. But for those of us still blissed out or buzzing from the heady, hedonism of acid-house, Detroit techno and the art of 'big fish, little fish, cardboard box' (ask your parents), a wave of socially-aware club acts such as Spiral Tribe, The Drum Club, Orbital and Banco de Gaia provided soundtracks to messy parties, even messier field-festivals and vegan cafes up and down the UK.

If in those days, you frequented cheap, or even free, festivals where the loos fell over in light winds, the only food on offer looked like a cat's breakfast and the clientele wore clothes made of hessian and glow sticks, you could bet your ticket that Dreadzone (and Ozric Tentacles, Culture Shock or Eat Static) were in the line-up. Which, of course, made those festivals far more bearable. Apart from the bit about the toilets.

Dreadzone were formed by ex-Big Audio Dynamite drummer Greg Roberts and were signed briefly (and perplexingly) to Creation Records, who knocked out the cracking '360' debut album but, as the label's focus turned to Oasis and Britpop, they let them go to Virgin Records and bang out two sterling examples of prime British dance-music albums.

Sophomore set 'Second Light', issued in 1995, still sounds like it was released this week and has just recently been reissued as a double CD. They racked up an unlikely hit with the sample-heavy and frankly bonkers 'Little Britain', as well as other singles 'Captain Dread' and 'Zion Youth'. Check out the press-pack video to sample the flavours. After 'Second Light', its follow-up 'Biological Radio' and several Peel Sessions, they waited four years before issuing 2001's 'Sound', momentum momentarily lost.

2012 has seen that lost momentum given a considerable shot in the arm with the aforementioned reissue and talk of a new album in the autumn. This all coincides nicely with a further spurt of live activity which includes festival slots (of course) including Bearded Theory and Beautiful Days, as well as their own headlining tour which kicks off in October in Reading and Bedford, followed by shows throughout November and December in Bristol, Preston, Norwich, London and more. We have tickets available now, priced from £15.

Kent visitors, please note - Dreadzone are also performing an ultra-rare show in Otford, near Sevenoaks, on Saturday 2nd June. There are a few tickets left for this one, priced at £16. Don't miss out - the band knows how to party.